As someone who spends 90% of his workday in front of a computer, a big part of working efficiently is being able to type like an absolute boss. It's a mark of deep dedication and professionalism to be able to sit up straight at your desk, and with not so much as a flicker of your eyes down to your keyboard, let your thoughts flow fluidly through your fingertips and onto your screen.

Growing up with a computer, I felt pretty comfortable typing on a QWERTY keyboard, which is the layout of keys that comes standard with almost every computer or keyboard offering you can buy. I'd heard that there were alternative ways to layout the keys that were more efficient for typing, but I felt fairly complacent in my relationship with QWERTY so I never took the time to look into it.

A few months ago I was listening to an interview with Matt Mullenweg, the BDFL of WordPress and founder of Automattic. Among other quirks, Matt is an evangelist for a keyboard layout called Dvorak, which places the most frequently used keys directly underneath the resting position of your fingers. During the interview, he said something that really caught my attention. "... I'm making up the numbers but in a year of typing QWERTY your fingers move like 18 miles and with Dvorak they move 2 miles."

When I heard that, my complacency with QWERTY evaporated. I did some quick Googling, and what I read was enough to convince me that Dvorak was worth a try. For example:

I found some arguments against Dvorak as well, but at this point my confirmation bias was working in overdrive. Plus, haters are gonna hate ;) I was off on a mission to learn to type Dvorak!

I found a company that sold Mac keyboard covers for Dvorak layouts and ordered one that would fit my work keyboard for about $30.

I had a feeling that I might have a tough time sticking with the learning process (every single key except for "A" and "M" change position when you switch between Dvorak and QWERTY!), so I crafted a plan for my Dvorak learning success.

My first few days with Dvorak were nothing short of excruciating. I found myself frequently losing my train of thought in the middle of sentences because I had to think on a letter by letter basis to peck out words. My neck started to throb from the strain of bobbing between looking down at my keyboard and then up at my screen. I honestly noticed a serious drop in my overall satisfaction and sense of well being. My colleagues took notice as well, because I started communicating like a caveman over Slack. When you can barely type, you think hard about what you want to say, or if it's even worth the mental effort at all.

At the end of day one, I went to do my typing test. 6 WPM. My colleagues just about died laughing. For the rest of that first week, the social pressure was what kept me going. I took my keyboard home with me that weekend and spent about an hour each day working through typing lessons.

My WPM slowly started to tick upward. By the second week, I could type most words without looking down at my keyboard, albeit slowly. I would frequently hit QWERTY keys instead of finding their new place on the Dvorak layout. I felt like if I concentrated hard enough, I could feel my brain rewiring my muscle memory and mental map of the keyboard.

By the end of the third week, I was starting to type with confidence, if not with speed and accuracy. I went all in and ordered three more keyboard covers, one each for my home and work laptops, and one for my wireless home keyboard. Finally, toward the end of week four, I eclipsed the halfway mark -- 60 WPM!

Below, I've included a chart of my progress that was generated using my Google Sheet tracker. 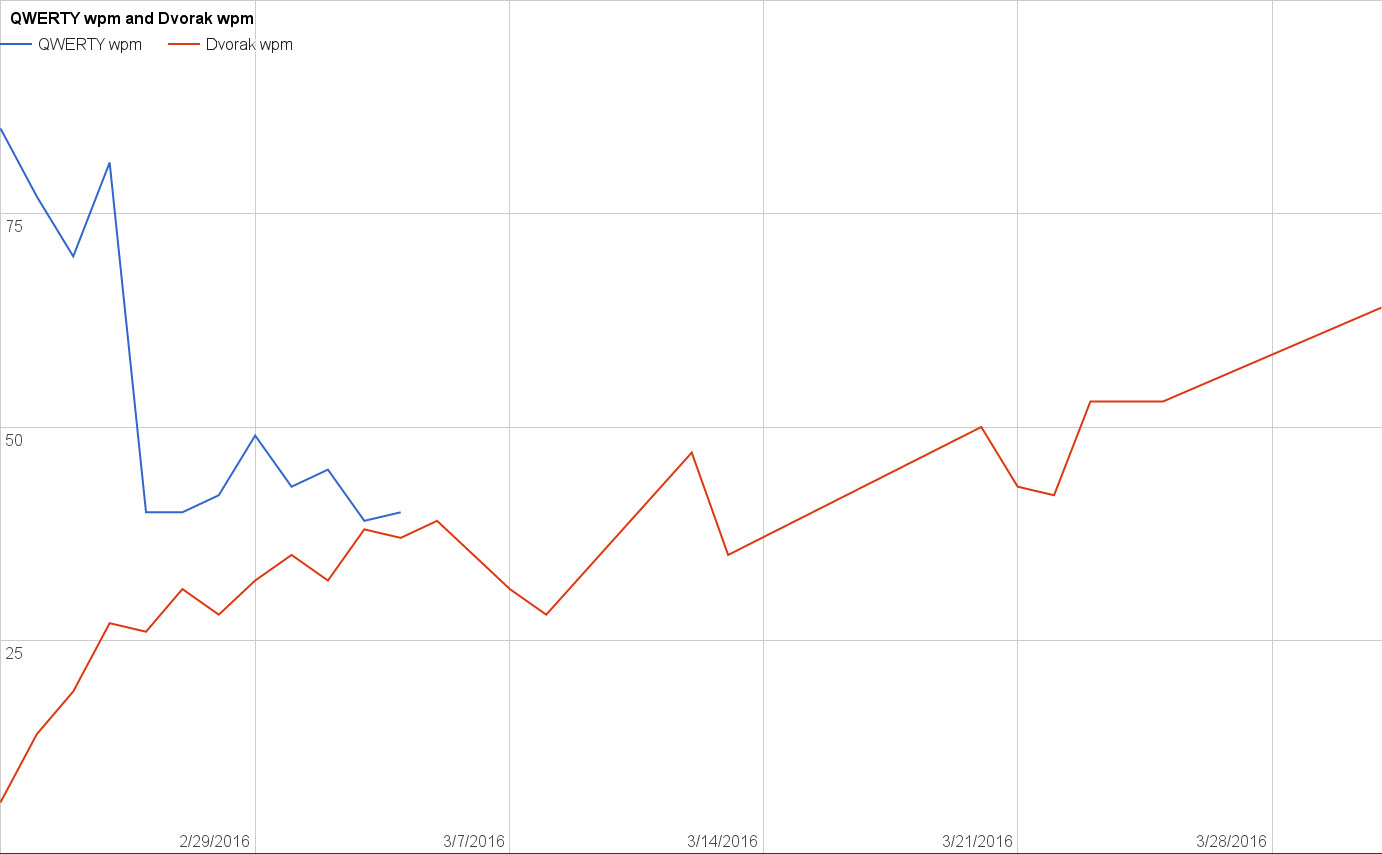 As you can see, I gave up after a week or two of tracking my QWERTY speed. It felt like I was undoing my progress!

Even though I am only halfway to my ultimate goal of 120 WPM, I wanted to share what I have learned thus far during the process of completely rewiring the typing part of brain, in case any of you have been thinking about trying to make the switch: